Odiham Parish Council conducts its business through an agreed committee structure which is widely accepted in the sector to allow sufficient time for debate at each meeting and focusses time, skills and experience in relevant areas. The full Council has the power to make all Council decisions in accordance with the Council’s adopted Standing Orders and Financial Regulations and delegates some of its business to committees which operate in accordance with adopted Terms of Reference.

Update May 2022
At the Annual Council Meeting on 17th May, Councillors agreed a different way of meeting in order to make best use of Councillor and Staff time whilst reaching lawful decisions in a timely manner.  This debate was prompted by Hart’s recent decision to reduce the planning consultation period to just 21 days and news that the Planning Reform will reduce this further to just 18 days.

The Full Council is permitted to consider any matter on behalf of the Council.  There is also a Scheme of Delegation in Place which allows the Clerk some authority to take action as long as decisions are taken in consultation with the Council Chair or relevant Committee Chair.

The decision of the Council was for Community Committee items to be added to the full Council agenda and for the Planning & Development Committee to draw up a lists of proposed responses to applications by email or Zoom meetings.  The comments would be submitted to Hart District Council under the Clerk’s delegated authority and formally ratified by the next full Council meeting.  All applications under consideration will still be published on OPC’s website. 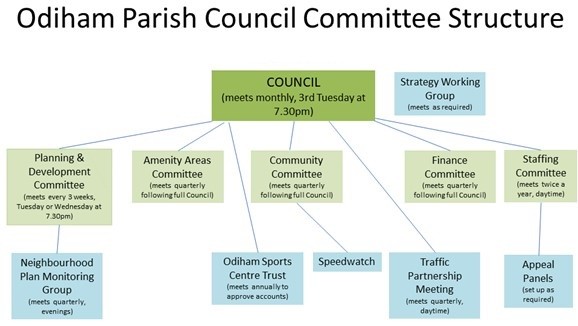 In addition to full Council and committees, working groups are regularly set up for specific projects or partnerships.  These are generally task & finish groups which sometimes include community or outside body representatives and do not have decision making powers.  The meetings are not open to members of the public, however, reports or decisions from the meetings are usually reported at a full Council or committee meeting.