Patricia MacGregor’s book about Odiham Castle 1200-1500 explains that John was active at Odiham in the days leading up to the sealing of Magna Carta (the blueprint for democracy around the world).

On May 29th 1215 he addressed a letter from Odiham to the Pope complaining about the insubordination of the barons. He travelled between Windsor, Winchester and Odiham in early June. On the 9th June he returned to Odiham and met with Peter de Roches, Bishop of Winchester, who accompanied him to Windsor the following day. On the 10th June he met baronial leaders at Runnymede.

The King was forced to agree to the limitations of his power and to consider the 48 articles (paragraphs) in the Articles of the Barons. 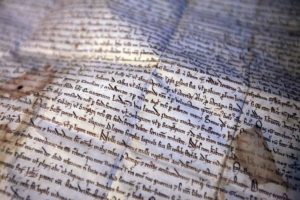 The Articles were drawn up in an attempt to avert civil war, and formed the basis for Magna Carta, which was agreed by King John at Runnymede on 15 June following five days of concentrated discussion and negotiation, when many of the Articles of the Barons (which King John had accepted in principle) were amended. Magna Carta finally consisted of 63 clauses but in the charter itself the clauses were not numbered, and the text read continuously.

The barons, successfully had said ‘no’ to the King and no King of England would ever have unrestricted power again.

King John returned to Odiham Castle on 26th June on his way to Winchester. The following day, the 27th June 1215, the Anglo Norman (vernacular) translation of the Magna Carta was issued from Odiham, along with the writ addressed to the Sheriff of Hampshire.