Odiham is home to the UK Chinook Force.

Royal Air Force Odiham operates three Chinook squadrons and one Army Air Corps (AAC) Lynx squadron. Their personnel are engaged in operations and exercises throughout the world and held at readiness to deploy worldwide. The contribution of RAF Odiham’s personnel, both at home and abroad, provides critical support to the delivery of the UK military’s operational tasks,  The Parish of Odiham is honoured to have them stationed within our community. 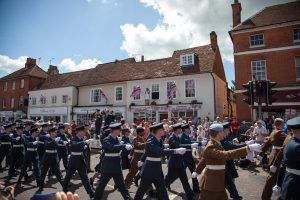 RAF Odiham also played a special role in the Queen’s coronation, see the video on youTube

WW2
“When we conquer England, Odiham will be my Air Headquarters”.

The popular belief is that after being invited to open RAF Odiham as a permanent airfield in 1937, the Chief of Staff of the Luftwaffe – General Erhard Milch was so impressed with what he saw that he is reputed to have told Hitler: “When we conquer England, Odiham will be my Air Headquarters”, and he ordered his pilots not to bomb RAF Odiham. Whether or not this story is true, the fact remains that RAF Odiham was never actually bombed during the war.

Odiham however did see action.  On the 18th of October 1940, a lone German bomber machine-gunned and bombed Odiham High Street, tragically killing 5 civilians.

Other incidents were recorded:
Luftwaffe Aircraft were first spotted in the Odiham vicinity on the 10th August 1940 carrying out area reconnaissance.

On the 12th August 1940 as part of the Pre-“Adler Tag” (Eagle Day) Luftwaffe Offensive on RAF Fighter Command Airfields…..RAF Odiham was the briefed target for an early morning raid by the Junkers 88 of Kampf Geschwadern 51 (Bomber Group 51).
They were fortunately successfully intercepted by the Hawker Hurricane Fighters of No.43 (F) Sqn from RAF Tangmere, West Sussex. They were harried and given such a mauling by No.43 Sqn that they lost cohesion and missed their target.

Indeed the only attack which did develop was on the 15th August 1940 and that was a mistake! Some JU88 crews of Lehr Geschwadern 1 (Operational Trials Wing 1) targeted RAF Odiham through a navigation error, being under the impression they were attacking their briefed target RAF Andover! 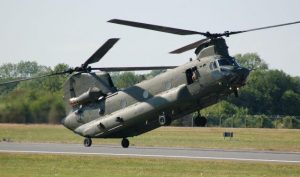 Little damage was sustained, but this did not prevent a decoy target airfield being established by the Air Ministry at Froyle, some three and a half miles to the South.

The next attack on the airfield did not occur till the 23rd March 1941.  While airfield expansion work was in progress a JU 88 jettisoned 12 bombs in the vicinity of the airfield while trying to get away from a very persistent Hurricane. Three days later on the 26th March 1941 another Luftwaffe Bomber was engaged by the Station’s defences as it flew low over the camp.

This was the last known and recorded incident of Luftwaffe aircraft in the close vicinity of RAF Odiham in WW2, having never sustained any significant damage in a deliberate attack.