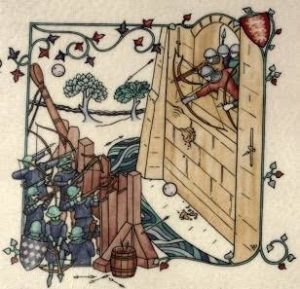 As King John had sealed the Magna Carta under duress, as soon as hostilities ceased, he received approval from his overlord, the Pope, to break his word. This action provoked the First Barons’ War. They invited Louis the Dauphin, son of Philip II of France, to take the throne. On 21st May, 1216, Louis landed unopposed on the Isle of Thanet in Kent. He was offered little resistance when he entered London and was proclaimed king at St Paul’s Cathedral (but was not crowned).

King John travelled around the country to oppose the rebel forces and on April 14th he made his last visit to Odiham Castle and stayed for five days. On the 14th June Louis took Winchester and then headed for Odiham. Here he encountered his first serious opposition. The occupants of the castle resisted waves of assaults by the French army. On the 3rd day the French brought up siege engines and placed them around the tower and missiles were fired. The occupants – three knights and ten sergeants made a sortie and engaged with an equal number of the enemy before withdrawing. They held out for a further twelve days and on 9th July 1216, they surrendered having been assured they would retain their freedom, arms and horses. It is recorded that the French were filled with astonishment and admiration for the defenders when only thirteen men rode out!

The attack on Odiham castle is recorded as one of the 24 most significant battlefields and sieges in the story of the fight for Magna Carta by The Battlefields Trust and The Magna Carta 800th Anniversary Commemoration Committee.