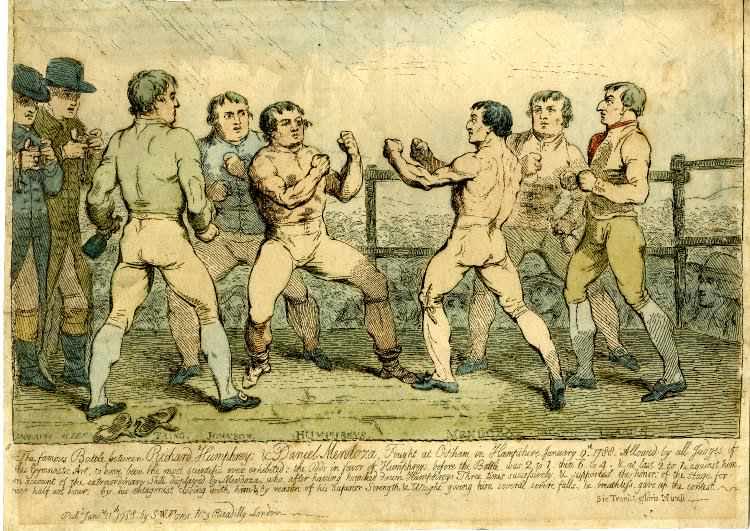 One of the biggest factors in boxing’s explosion in popularity from 1788 was the publicised and dramatic rivalry between Daniel Mendoza and Richard Humphries. This was played out across three contests between 1788 and 1790 – the first of which took place in Odiham.

It was said that the two rivals had once been friends, but by early 1788, before the drama of their first fight, they had become bitterly estranged.

To much anticipation, their first fight was agreed in late 1787  and seemed to have all the drama that you have come to expect with modern day boxing matches – albeit with slightly more refinement. In almost a stereotype of an English gentleman, Humphries seemed to goad his rival by declaring that he would conduct himself “with as much composure as if he was sipping a dish of tea”.

The contest at Odiham took place on the 9 January 1788 on a specially erected stage in the presence of hundreds of spectators and was described by one writer as “the memorable bout between Achilles and Hector hardly excited more expectation”, even the weather was dramatic, with driving rain forcing Humphries at one stage to remove his shoes.

The fight, narrowly won by Humphries, was followed by accusations from Mendoza’s camp of foul play, relating to an incident that occurred early in the contest, when Mendoza forced Humphries against the railings. With Humphries looking vulnerable to a knockout, Mendoza aimed a second blow at him, only for Humphries corner man, Tom Johnson, a famous boxing champion in his own right, to intercede and block Mendoza’s punch.

The Mendoza faction immediately cried foul at what they claimed to be illegal interference. Humphries’ camp claiming that their man was already down, and it was actually Mendoza who had contravened the rules by aiming another blow.

The umpires sided with Humphries and the fight continued. It was suggested this incident ruined Mendoza’s focus and put him in an agitated frame of mind. Over the next 29 minutes Humphries landed blow after blow on Mendoza, who was eventually knocked to the ground and had to be carried off the stage, apparently lifeless.

The fight at Odiham was however, just the beginning. The fight continued in the press and despite Humphries being rumoured to retire if he won, a rematch was arranged. The two men went on to conclude a trilogy of equally dramatic fights that would see Mendoza eventually establishing his superiority over his arch rival.